The fourth of my celebratory repostings in honour of the Russian setting of Trinity: The Koldun Code, is about putting on a fabulous 'zakuski' or aperitif spread, Russian style--but making it dinner! 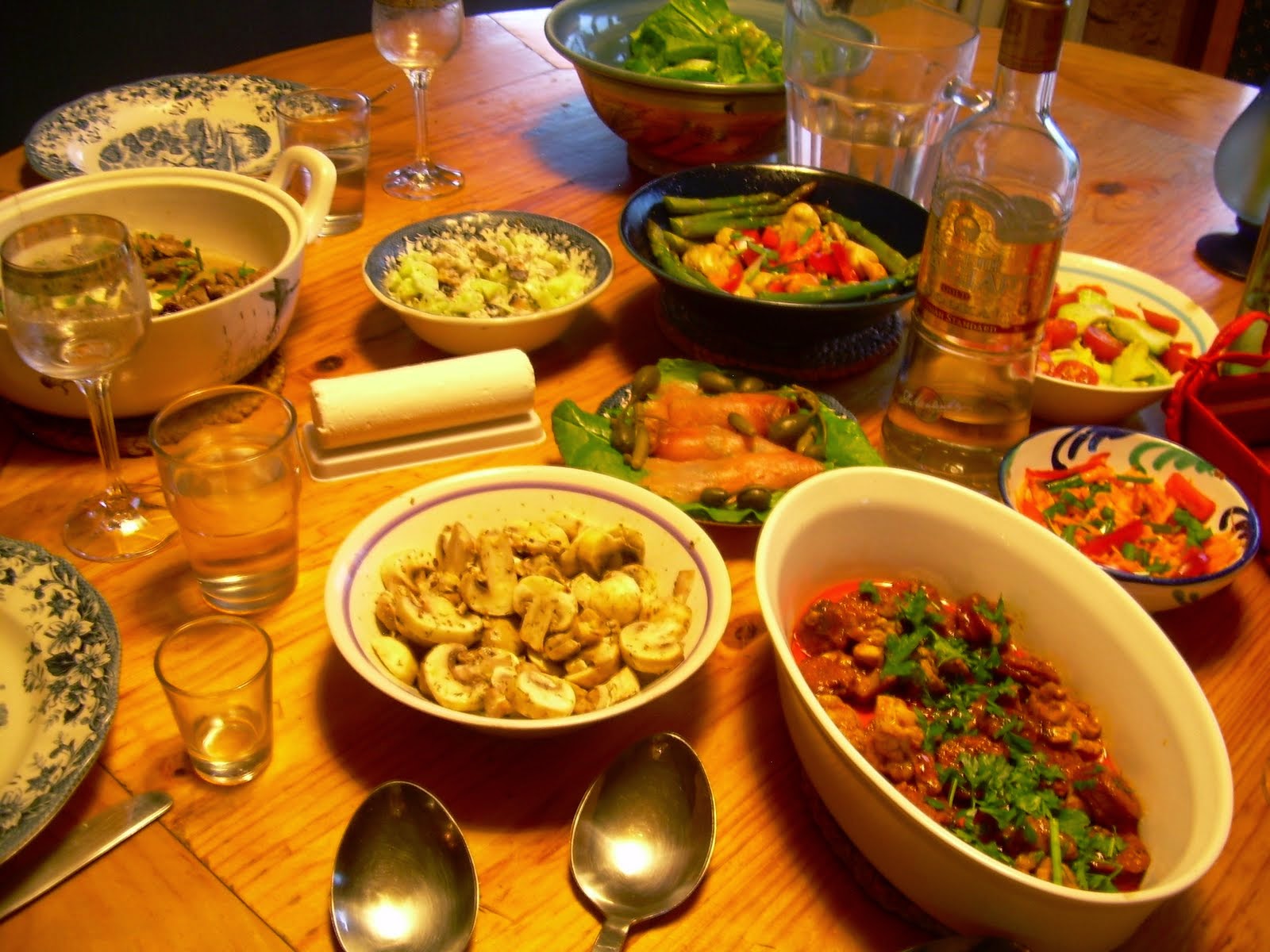 Zakuski spread for dinner
The other day, I bought this gorgeous book called 'Culinaria Russia', which like the other titles in this series, is not so much a recipe book(though there are recipes) as a marvellous journey through the culinary culture of this richly varied and extraordinary part of the world. For in fact it's not just Russia, ie the Russian Federation, that's covered, but also Ukraine, Georgia, Armenia, and Azerbaijan(not sure what the latter four would think of being lumped in with 'Russia', but never mind!) There's wonderful articles and photos on all sorts of aspects of food, drink, folklore associated with food, festivals, looks at sub-cultures, and lots more. It's fascinating stuff!
But as I said, there's also recipes, and there's also the most mouth-watering pictures of food you can imagine. Four such pictorial spreads are devoted to the Russian tradition of zakuski, which can be usefully compared to the Spanish tradition of tapas, or the Scandinavian one of smorgasbord. Like those ones, it accompanies drink,(usually vodka, in this case) is often presented in small dishes(though it can be in bigger ones) and features both cold and hot dishes. Zakuski can be as simple as olives, gherkins and pickled herring, or as elaborate as you like. Salads also feature strongly; colour and pleasing pattern is important.
So, inspired by those pictures, I put together a bit of a zakuski-style spread for dinner the other day. Not all of it was traditionally Russian, but I was still inspired by the concept, the colours, the patterns. And it all tasted great, was simple and quick to prepare, and elicited many admiring comments, both as to the look and the taste!
This is what I made(see photo):
In foreground to right of photo, a Georgian-inspired chicken dish, with tomatoes, tomato puree, onions, dill, chicken stock, Tokay(supposed to use Madeira, but I didn't have any, so I substituted), lemon juice, sour cream. Added chorizo too as didn't have enough chicken! Basically, you just cut up the chicken and chorizo, brown in a little butter along with chopped onions, then add tomatoes, lemon juice, dill, stock, wine, and tomato puree, cook till done(about half an hour). Sauce should be lovely and thick, don't let it burn
In foreground to left of photo, is a mushroom salad. Slice button mushrooms thinly, toss with salt, pepper, olive oil, lemon juice, dill, chives. Do this at least an hour or so before you eat the salad, as then it absorbs the flavour of the dressing most deliciously.
Behind the chicken dish, on right, in mid-field, is a grated carrot salad decorated with capsicum and sorrel. Vinaigrette for the salad is made with Dijon mustard, white balsamic vinegar and olive oil. To the left of the carrot salad, are smoked salmon rolls on a bed of sorrel: slices of smoked salmon simply stuffed with small gherkins and caper-berries.
Far left in background is the other hot dish, which is a Russian-inspired dish of finely cut lamb slices, sauteed in some oil with onion, then vodka added(not too much), cranberries, finely chopped garlic, caraway, and finally sour cream(and salt and pepper of course). Delicious! To the right of that, is a salt herring salad, made of chopped up salt herring slices(which I'd soaked in water first, and then in lemon juice as otherwise find them too salty), mixed with chopped apple, chopped walnuts, finely chopped fresh garlic, and chopped cucumber. Made a dressing for this out of a little olive oil, a little white wine vinegar, sour cream, dill, and wholegrain mustard, it went perfectly with the flavours. Then to the right of that is a warm (but not hot) salad made of braised scallops cooked in a little butter, a little white wine, with garlic, salt and pepper, decorated with capsicum, tomatoes, etc. To the right of that, just behind the bottle of Russian Standard vodka, a salad of avocado, tomato, olives and capsicum, with a dressing like the carrot salad(yes, I know, not very Russian, the avocado, but never mind, improvisation is the key in zakuski!), and finally, in the far background, a green salad with lettuce right out of the garden and a vinaigrette made of olive oil, Dijon mustard, red wine vinegar, with chives and garlic chives. For dessert we had the remaining half of a delicious strawberry tart David had made the day before.
It was a wonderful feast!
Posted by Sophie Masson at 8:04 AM